by The Exit Promise Contributors 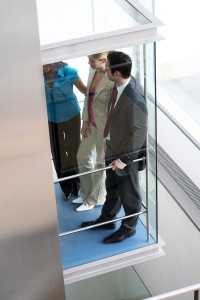 Answering the age-old (dreaded) question, “So, what do you do?”

How many times have you been to a cocktail or Christmas party, making friendly conversation, when someone in the group asks, “So what do you do?”

Most business owners and consultants struggle with giving elevator speeches. Actually, let’s forget struggle and move straight to panic, dread, and sweat. They think, “How could I possibly sum up what I do in 10 seconds? In a conversational way? Without stumbling? And without boring these people?” The doubts keep piling up, and this is no time to pull out sales brochures and marketing materials.

The goal of an elevator speech is to quickly, succinctly explain what you do, how you do it, and why you do it well.

But most business owners don’t realize, that’s not what people really want to know. They want to know what you can do for them. Or for someone they know.

So it is our job to deliver the most compelling, simple and unique elevator speech possible. I call it the 10-Second Hook.

He was telling people why his camp is a great place for kids to canoe, hike, swim, practice archery, meet new friends, etc. He was describing the typical summer camp we all know and love (the stuff of sales brochures and marketing materials). And his camp sounded, well – typical. Average. Expected.

When, in fact, he and his counselors were extremely dedicated to building each camper’s sense of confidence, personal growth and achievement. But that’s not what he was telling parents at seminars, or folks at cocktail parties and fundraisers.

We met with key counselors and camp staff for two days of full-immersion and strategic planning. Moving beyond the expected “niceties” of summer camp, we wanted to find what kids were really struggling with.

It was no surprise to anyone that self-esteem kept coming up. Kids of all ages are constantly struggling with self-esteem. So many of them lack the confidence and direction to truly believe in their own self-worth?

The camp director and his staff immediately made the connection with this struggle, and communicated all the ways they are dedicated to cultivating positive self-esteem within each of their campers. Their Single Nail™ of Self-Esteem got to the heart of the camp’s mission, and tapped into what their campers were struggling with the most.

A few weeks later, the director had a new strategy and a new 10-Second Hook: “Did you know a girl’s self-esteem peaks at age 9, then takes a nose dive?”

Yikes. (If you’re the parent of a young girl, this hits you in the gut.)

And he continued with, “I run a 500-acre wooded retreat where kids ages 7 to 17 learn the four secrets to achieving a life of confidence and high aspirations. I’m amazed how popular our camp has become.”

Now his audience can make connections – as parents with children, as uncles, aunts, neighbors, friends, colleagues.

Now they know what this guy has to offer, and who his camp serves. And more than likely, they’re compelled to ask more.

The 10-Second Hook leads to a more meaningful conversation, rife with possibility. And the camp’s focus on a Single Nail removed the director from becoming a summer camp commodity.

As a business owner, can you afford not to find your most effective 10-Second Hook?